Wicked Plants: The Weed That Killed Lincoln's Mother and Other Botanical Atrocities, 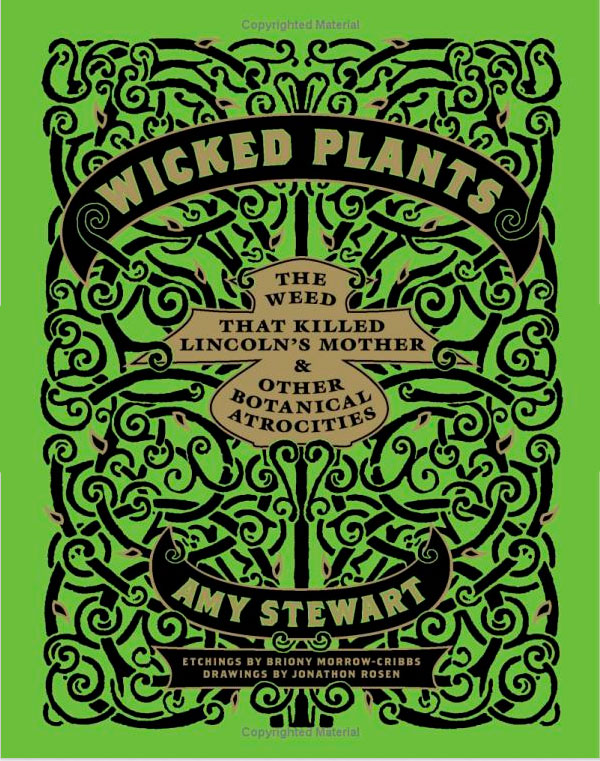 A creepy little book from author Amy Stewart, Wicked Plants has been on the best seller list at indie and mainstream bookstores alike, since its publication date.  It’s a must-read for fans of I Must Garden products, because our products are made from plants that smell wicked to animals.  If the animals tried to keep us humans out of their gardens, they might use some of the plants detailed in Wicked Plants.  Better to be safe than sorry!  Here’s what this frightful delightful book has in store for you!

The book is not intended to be a comprehensive field manual for poisonous plants.  Stewart writes  “If this book entertains, alarms, and enlightens you, I’ve done my job.  I’m not a botanist or a scientist but rather a writer and a gardener who is fascinated by the natural world.”  At the back of the book, she lists field guides and references for further reading for those who want more  in-depth information and photos.

She also writes, in the introduction to the book called “Consider Yourself Warned,” that she is most definitely not a medical professional, and that Wicked Plants is not intended to replace information from the doctor.  She cautions “And if you suspect that someone has been poisoned by a plant, please do not spend precious time flipping through this book in search of symptoms or a diagnosis. . . Don’t try to figure it out on your own.  Instead, call a poison control center at 800-222-1222, or seek immediate medical attention.”

The Design Makes the Book

In addition to soaking up all of the interesting trivia contained in Wicked Plants, you’ll find yourself  enthralled and impressed by the book design.  The outside cover is a sickly-tinged lime green, with a drawing of what looks like an old, wrought-iron cemetery gate on the front.  Inside, the pages look like old parchment, and are illustrated with botanical etchings by Briony Morrow-Cribbs, and fantastical, creepy illustrations by Jonathon Rosen.  The main text is black, and the etchings, illustrations and sidebars are sepia brown.  Plant section headings are written in a font reminiscent of an ancient old man scratching away with an ink bottle and quill pen.  In other words, the medium fits the message.

The stories of murder and mayhem with plants would be as true, and possibly, as interesting if presented in a straightforward glossy plant book, but they would not be as fun.  Fun, with a dose of learning, is clearly Stewart’s aim.

What Makes a Wicked Plant?

Ahhh, the definition is different for everyone.  In this book, there are the following categories of wicked:

Plants That Changed the World

Some plants change the world because of the good they do.  Bark from the cinchona tree makes quinine.  During World War II, the availability and use of quinine, which comes from the trees, affected the outcome of many conflicts.  Those who had them, or territories that could grow them, for the essential source of quinine, the first effective treatment for malaria, got ahead.  Those who didn’t, or could not effectively produce and distribute medicine from the tree bark, and were fighting in tropical jungles, lost men by the tens of thousands-to illness, not bullets.

Other plants change the word with negative impacts.  Many of these are detailed in Wicked Plants, giving readers a new appreciation for what some might mistake for common weeds.

Erythroxylum coca, the plant from which the drug cocaine is derived, is a native of Peru.  Nobody would argue with the deleterious effects of this drug in individual neighborhoods and world-wide politics.

Papaver somniferum, the Opium Poppy, is the source of income for many farmers in Afghanistan, continually de-stabilizing the region and funding questionable activities on the international stage.

Lythrum salicaria, purple loosestrife, has destroyed acres of wetlands, due to its invasiveness.  While their impact on overall world climate change may be minimal, in comparison to other issues, the wetlands they have overtaken, and species they have pushed out, are a part of environmental destruction causing problems around the world.

Nicotiana tabacum, tobacco, has, in the words of Stewart “taken the lives of ninety million people, led to the establishment of slavery in the American South, and spawned a global industry worth $300 billion.

Eupatorium rugosum, White Snakeroot, is the weed that killed Abraham Lincoln’s mother, when he was just 9 years old.  Who knows how his life, and consequently the lives of many Americans, would have changed, had his mother lived?

In addition to descriptions of “superstar”  individual wicked plants, there are chapters and sections detailing plant sub-groups.  One of the funniest, as well as potentially most useful chapters is the “Botanical Crime Families” chapter.  It gives more information about plant families that people commonly come into contact with, and which contain many poisonous or otherwise dreadful members.  Detailed in this chapter are the Nightshade family, with potatoes, petunias, and tomatoes.  The cashew family makes an appearance, as does the spurge family with its popular house plants like the rubber tree and poinsettias.

We can be fooled into thinking that if one plant is edible, its relatives are, too.  That’s not necessarily the case.  A careful reading of this book will dispel that, and other common myths about how to deal with the wild world of plants.