Chrysanthemums (Chrysanthemum) are sometimes called mums or chrysanths for short. Their name is derived from the Greek words for gold (chrysos) and flower (anthemon). They are mostly perennial flowering plants of which there are around thirty species. They are native to Asia and northeastern parts of Europe. They were first cultivated in China as far back as the fifteenth century BC. They are often depicted in East Asian art, along with orchids, bamboo, and plum blossoms. During the Double Ninth Festival in China, it is customary to drink chrysanthemum-flavored rice wine to ward off danger because the flowers traditionally possess cleansing qualities. Chrysanthemum flowers can also be boiled to make a sweet beverage called chrysanthemum tea, which is known for relieving flu symptoms. The flowers were likely introduced to Japan sometimes in the eighth century AD, where it became part of the emperor’s official seal. Small flowers are often used to garnish sashimi, and the leaves are steamed or boiled and eaten as greens. The flowers were then brought to Europe in the seventeenth century AD. 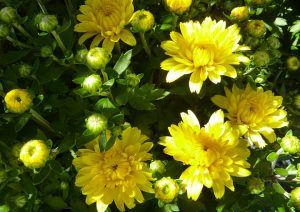 In parts of Europe - such as France, Belgium, Italy, Hungary, and surrounding areas - chrysanthemums are associated with death. They are only seen as funerals and placed on graves in these countries. In the United States they are not regarded as such and usually thought of as cheerful plants. The chrysanthemum is also the official flower of Chicago and of Salinas, California. In Australia, the flower is traditionally given to mothers on Mother’s Day and men wear them on lapels.

The genus originally included more species, but was split into several including Argyranthemum, Lucanthemopsis, Leucanthemum, and Tanacetum to name a few. They are all types of daisies and tansies. Modern chrysanthemums grown for ornamental purposes are much more showy than wild varieties. They come in various forms from daisy-shapes to pom-poms to buttons. There are numerous hybrids and cultivars. Traditionally, they are yellow, but white, purple, red, and jewel-toned cultivars have been developed. 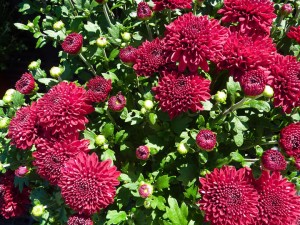 There are two types of chrysanthemums: garden hardy and exhibition. Garden hardy chrysanthemums can be overwintered in the ground as far north as USDA zone 3 and withstand wind and rain, while exhibition chrysanthemums are not nearly as durable. Garden hardy mums are also known to produce an abundance of blooms with no assistance such as staking. They are not separate species, but instead hybrids that have been developed. Exhibition varieties can be used as bonsais and in hanging baskets, as well as being trained as trees, fans, and cascades. Both varieties typically bloom in the autumn. Depending on climate they can flower from early September to the middle of October. For the best blooms, they should have full sun and rich, slightly alkaline, well-draining soil. Propagation can be completed by taking stem cuttings in the spring.

Florist’s Chrysanthemums (Chrysanthemum morifolium) are an exhibition variety growing from zone 9b to 5a. Their red, orange, yellow, white, or lavender flowers grow on long stems that are good for cuttings. These are the most common type of chrysanthemum found in garden supply stores, so be aware if you are seeking garden hardy varieties. Belgian Chrysanthemums are newly trademarked and come in every color imaginable. They are known for being easy to grow and prolific bloomers that are very hardy. An interesting species is the Garland Chrysanthemum (Chrysanthemum coronarium). It is the variety most often used in cuisine in Asia and it is one of the few annual species in the genus. 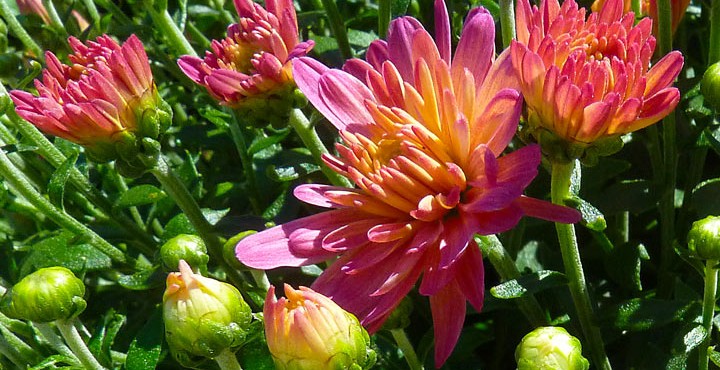