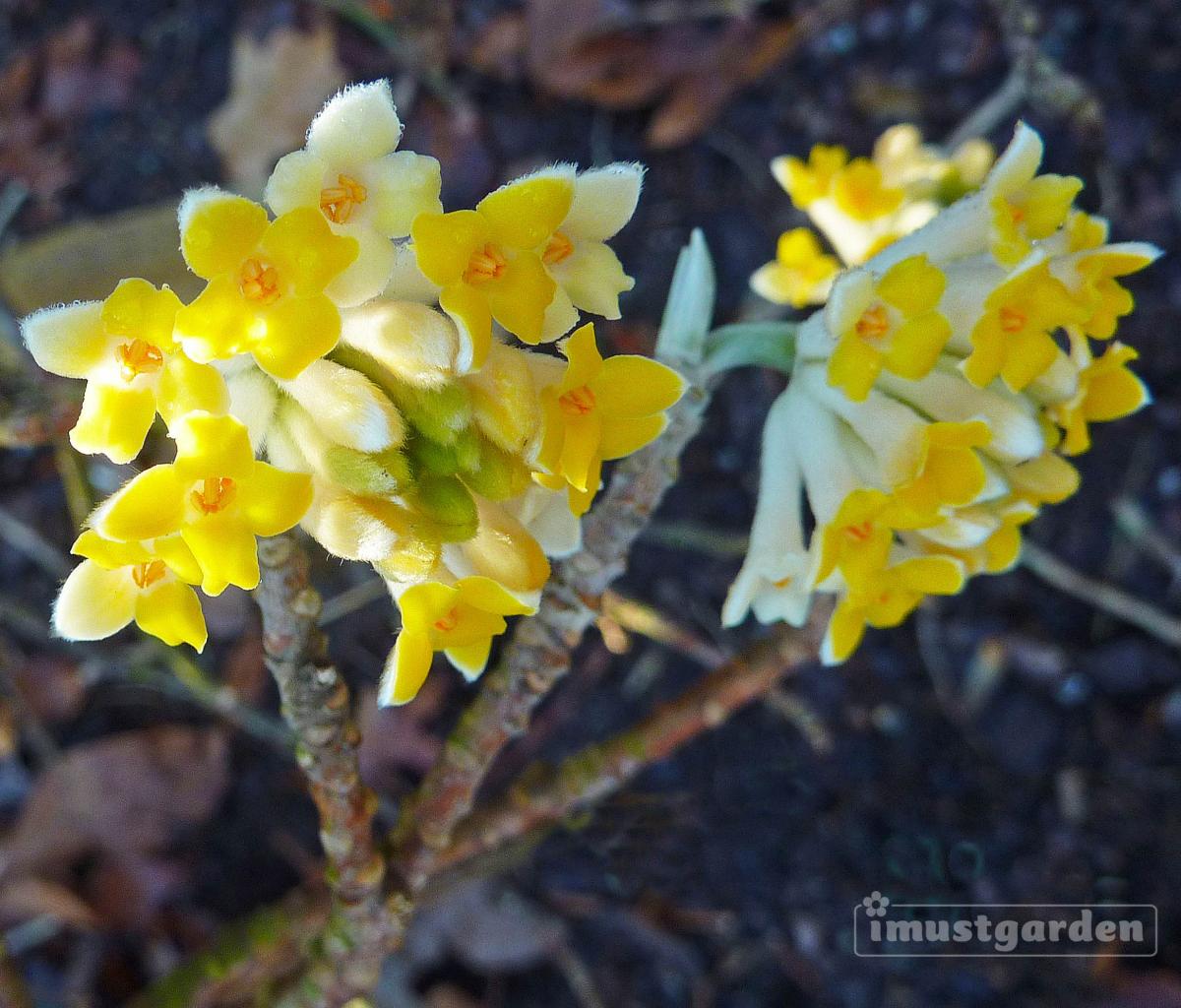 Edgeworthia Chrysantha, also known as Paper Bush or Yellow Daphne, is a deciduous shrub whose fragrant trumpet-shaped, fuzzy flowers form in tight clusters at the ends of upright, leafless stems during the cold days of winter. In summer, it transforms into a glorious neatly, mounding shrub. It is one of those rare garden treasures that can be enjoyed year-round. 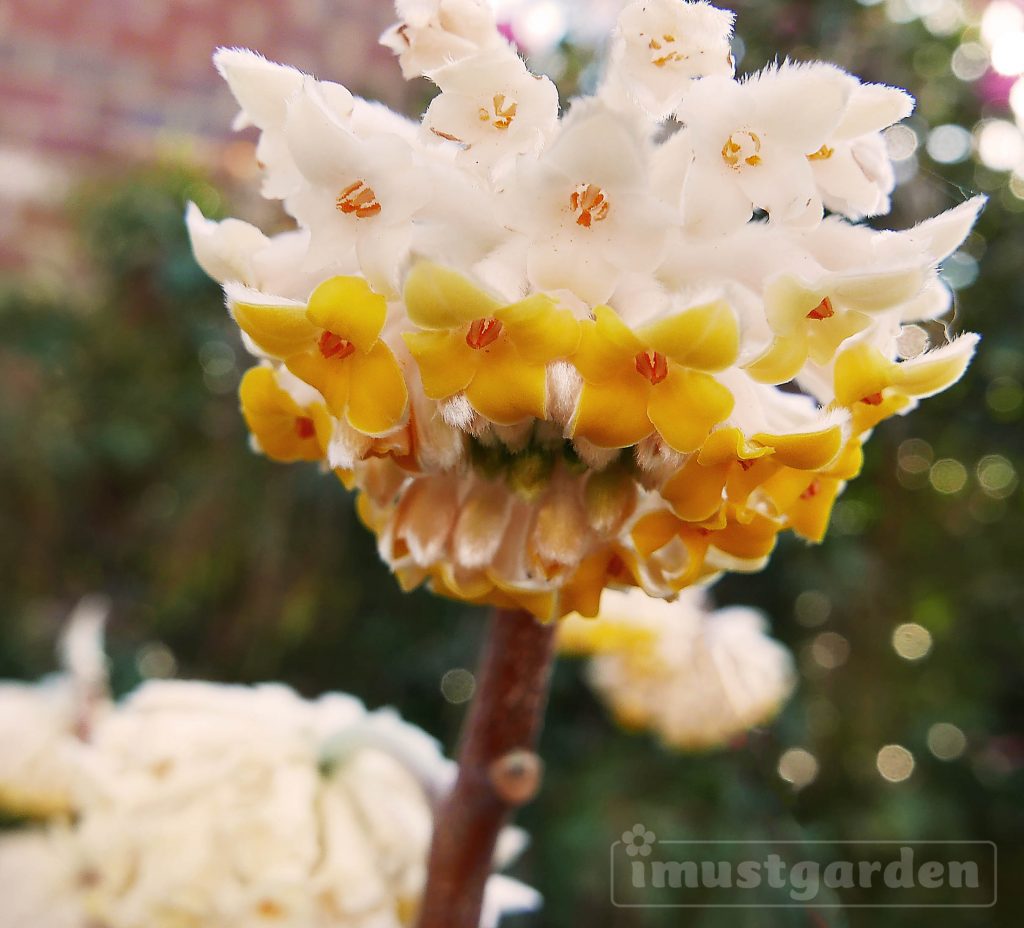 Edgeworthia is a hardy plant in zones 7-9 (though I know a few living sheltered-lives in zone 6.) The buds start to form in late summer and begin swelling late in the year, just as gardeners are getting the winter blues. By late winter, the shrub boasts soft yellow and white blooms that fade to white. Summer brings attractive, leathery foliage that lasts until fall. The leaves fade and drop and, as the weather turns cold, the parasol-like bud clusters delicately droop their silvery heads over attractive woody stems. 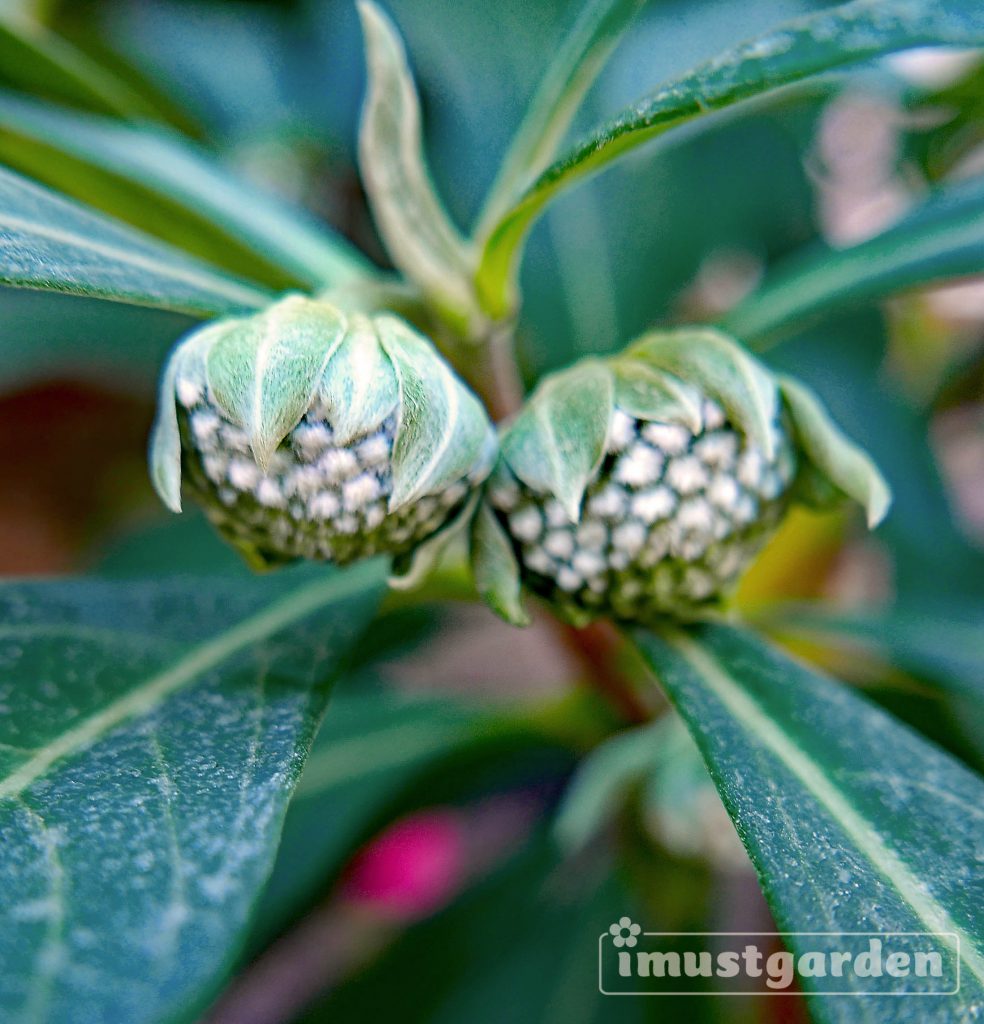 The buds on Edgeworthia start to form in late summer[/caption]

The bark also rises to the occasion both in aesthetic and function. Its durable fibers are used in Japan to make strong, high-grade paper for a variety of purposes. Current applications include wallpaper and calligraphy paper, but historically it was used to make Japanese bank notes. The paper is handmade beginning with the harvest and steaming of stems in early summer. The fibers of the outer bark are stripped and the inner bark is cooked with soda ash, then turned to pulp. The result is a thin yet durable paper. Edgeworthia stems are quite supple and can also be easily knotted or used in decorative displays. 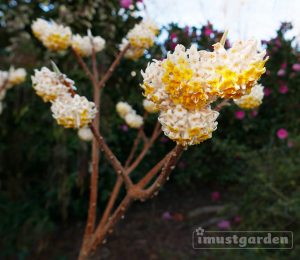 Edgeworthia will grow in full sun but does best in areas with filtered sun or in shade.[/caption]

In its native China, Edgeworthia grows along stream banks and forest edges. It can also be found in Japan, Nepal and throughout the Himalayas. This shrub isn’t picky about light. It will grow in full sun, but does best in areas with filtered sun or shade. Growing Edgeworthia along a south- or west-facing wall can produce a stunning effect. It likes rich, organic soil that is consistently moist and well-drained. Older plants will require a less rigorous watering schedule than younger, more tender plants. 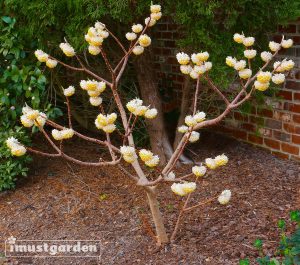 Planting Edgeworthia near entryways allows you to readily enjoy its sweet, intoxicating scent.[/caption]

Edgeworthia can be found at gardening centers in the spring. Consider planting it near entryways or paths to fully enjoy its sweet, intoxicating scent. The fragrance is reminiscent of Daphne, but Edgeworthia is more vigorous and much easier to please, though a bit more sprawling. Some gardeners cover the plant the first winter to ensure success and get a head start on healthy blooms in spring. But, be warned, you may miss the spectacle of icicles forming on the showy silver buds if it’s covered.

Mature bushes are typically an average of 6 feet in height and width, but specimens have been reported as high as 8 feet and beyond, undisturbed. (There’s a massive Edgeworthia growing at Pine Knot Farms in Clarksville, VA. It’s truly an impressive specimen!) The woody stems may sprawl slightly, but are never leggy, and the plants tend to self-regulate to a contained, rounded shape. If the stems start going out of bounds, they can easily be reshaped and kept to a desired size with light pruning. Fortunately, Edgeworthia does not require pruning to thrive, other than the occasional removal of a dead branch. 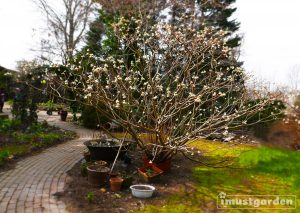 A mature paper bush can be divided in mid to late winter to make a new plant by digging up the root ball and separating plants at the roots. Ideally, the soil will have a pH of neutral to acidic and you can amend it as needed with compost.

Edgeworthia is not particularly plagued by animals or disease. I have seen reports of earwigs eating the summer leaves but pest problems would be the exception, not the rule, for this easy-going shrub.

There is currently some confusion about the nomenclature of the plant, which includes two varieties that are often referred to synonymously: Edgeworthia Chrysantha and Edgeworthia Papyrifera. Both varieties were submitted for publication around the same time with the designation “chrysantha” referring to the yellow flowers and “papyrifera” to paper-producing bark. To further complicate the debate, both designations have also been listed as Edgeworthia Tomentosa. I’m sticking with Edgeworthia Chrysantha, in accordance with the “first-in-time” rule. 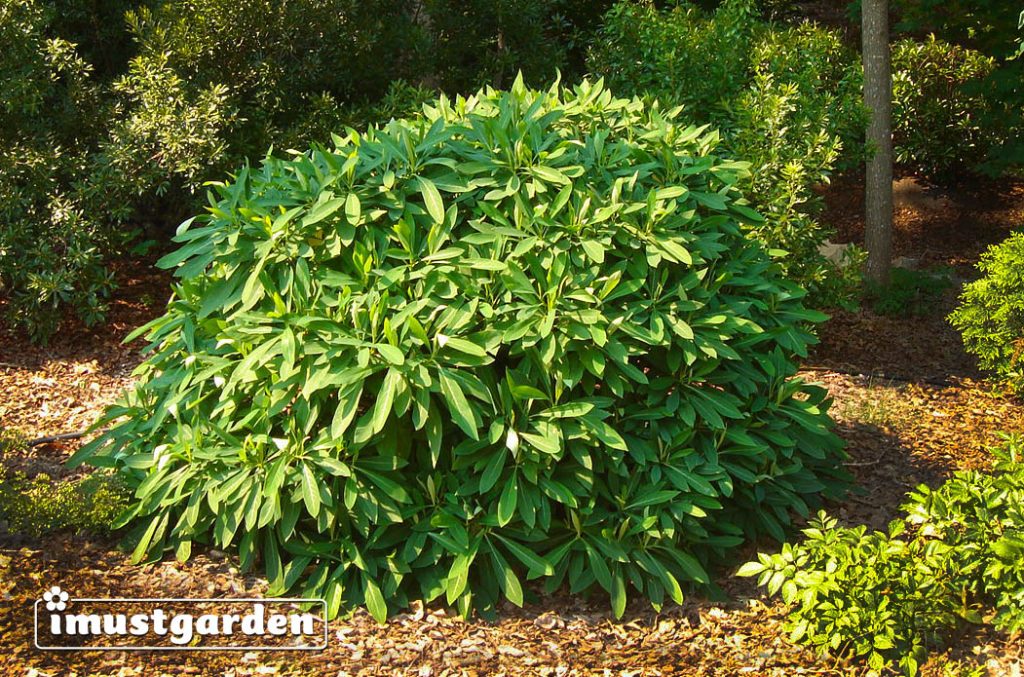 Neatly mounding Edgeworthia is equally pleasing in the summer[/caption]

Edgeworthia is a stunning shrub often showcased at botanical gardens. Here in the Triangle area of North Carolina, you can find specimens in Chapel Hill at the NC Botanical Garden or the University of North Carolina Arboretum, in Durham at the Sarah P. Duke gardens or in Raleigh at the R.C. Raulston Arboretum. Other lovely specimens can be found at the Brooklyn and Atlanta botanical gardens, the Lewis Ginter Botanical Garden in Richmond, VA, and at the Imperial Palace in Tokyo. The next time you visit a botanical garden, I recommend seeking out this lovely and unusual plant.

Edgeworthia is a champion for the garden collector, boasting beauty in various forms year-round. With spring right around the corner, now is the perfect time to begin your love affair with the paper bush. It gives much and requires little, and the heavenly scent is always welcome.

5 of the best reasons to grow Edgeworthia Chrysantha: