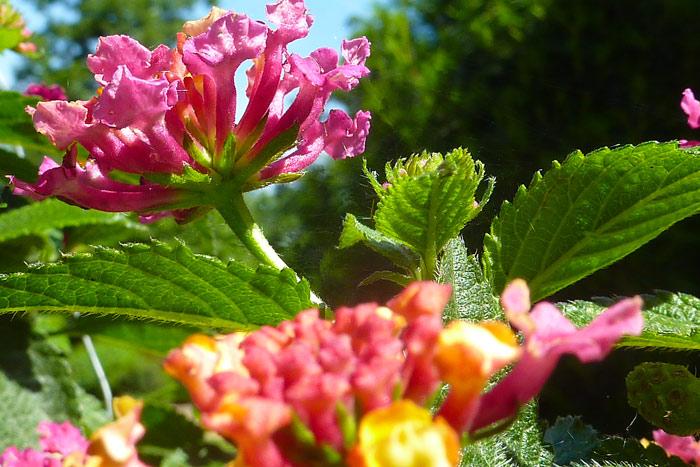 The Lantana genus consists of around 150 species of flowering perennials in the verbena family. Some lantanas are referred to as shrub verbenas and they can grow up to six feet in height. They are native to the tropical regions of the Americas and Africa. They have become invasive in a number of parts of the world including Australia, parts of Asia, and parts of the United States. In the areas where the plants is considered a noxious weed, the rapid spread has been aided by their somewhat poisonous leaves, which most animals avoid, allowing them to flourish. While the leaves are poisonous, the fruit is not and birds consume the fruits readily and distribute the seeds. 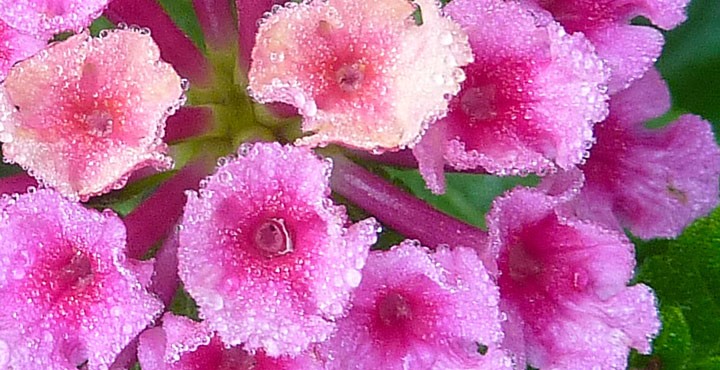 The scented flower clusters of lantanas, called umbels, are typically a combination of shades of red, orange, yellow, blue, purple, and white florets. The flowers change color as the plants get older resulting sometimes in clusters of two or three colors. Both bees and butterflies are attracted to the lantana flowers. In temperate climates, lantanas are commonly cultivated for their very showy flowers, and treated as annuals. In the United States, they have been naturalized as far north as the Carolinas.

The two most popular varieties are the Spanish Flag Lantana (Lantana camara) and the Trailing Lantana (Lantana montevidensis), and there are also hybrids of the two. Spanish Flag Lantana was originally native to the American tropics and is sometimes called Red Sage, Yellow Sage, or Wild Sage, despite its lack of relation to actual sage. It was introduced to Hawaii as part of a botanical exchange between universities and it escaped into the wild where it has now become naturalized. It performs optimally in USDA zones 11 through 9b and can be propagated with stem cuttings or seeds. They are not difficult to propagate in the right climate and are actually more difficult to keep under control. Cut off the green fruit and do not allow it to ripen to prevent birds from carrying away the seeds. 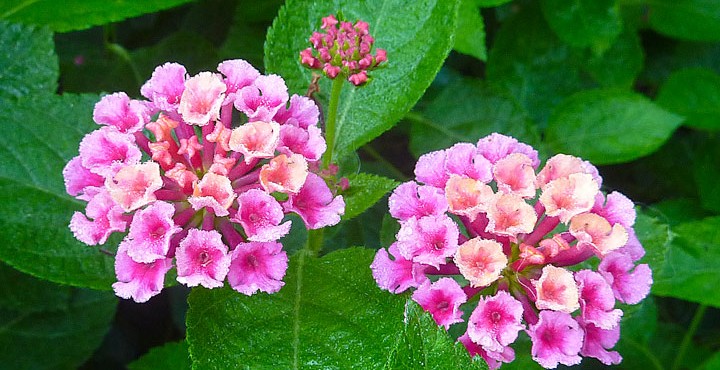 Trailing Lantana has many common names such as Weeping Lantana, Small Lantana, Purple Lantana, and Trailing Shrub Verbena. It was originally native to South America and is hardiest in USDA zones 11 through 8a. It has blue and white or purple and white flowers, sometimes with yellow centers, that flower year-round in warmer climates. With support it will become a climbing vine-like form. Without an edge to climb it ends up more similar to a groundcover. Propagation is performed by dividing the rootball, but again, it can become invasive if not kept in check. There are a number of taller and shorter cultivars of both species. In general, the shorter plants flower more prolifically than the taller ones.

Lantanas, although tropical originally, are fairly hardy. They are drought and heat tolerant. They are avoided by most herbivores that eat plants, but they fall victim to many pests and can be prone to infestations. The Lantana Bug and also caterpillars in the Lepidoptera family, such as ghost moths, avidly feed on these plants. Sweet Potato Whiteflies as well as the fungus Ceratobasidium cornigerm can cause issues. Since I’ve always grown lantanas as annuals, I’m happy to say I’ve never experienced any problems. The one thing I have to force myself to do early in the season is to cut them back a few times which cuts some of the first flowers. However painful, it makes a huge difference and plants are so much more robust from the early trimming. 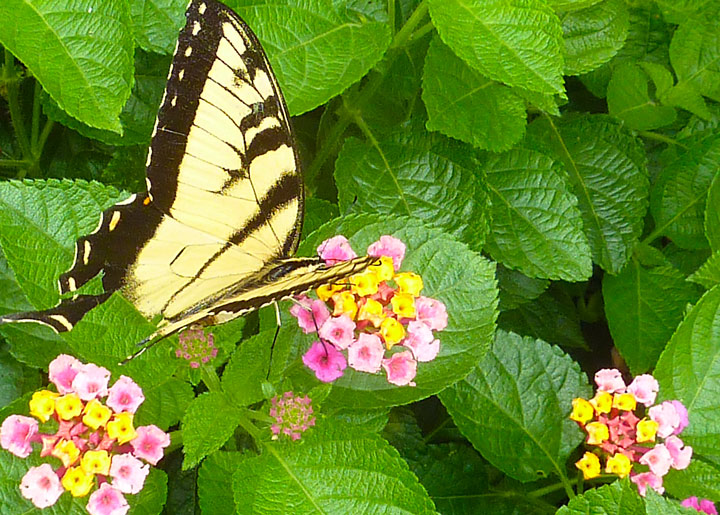