When a rabbit looks at your garden, it doesn’t recognize all your hard work. The only thing it sees is food, and it will nibble almost every plant it can get its teeth on down to nothing. That’s its nature. But, with a little understanding of the rabbit’s nature, you can convince any hungry bunnies to seek their next meal somewhere else. 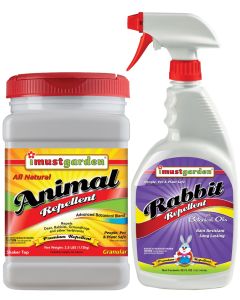 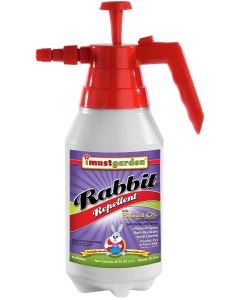 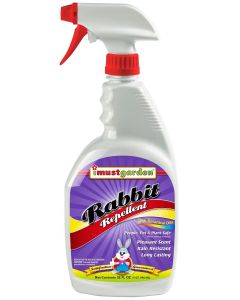 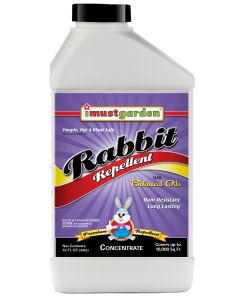 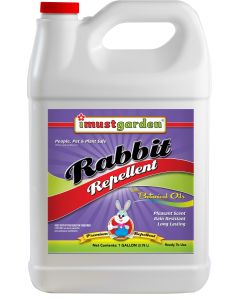 A Little Bit About Rabbits

Rabbits are considered a prey species. This means their role in nature is primarily to provide food for a variety of carnivores. In order to keep from being hunted into extinction, rabbits possess a number of exceptional adaptations that allow them to not only survive but thrive.

Their bodies are specially formed to detect and evade predators. The placement of their eyes and the shape of their skulls allow for almost 360-degree vision, and those extra-long ears aren’t just for show. They allow the rabbit to quickly hear approaching danger, at which point its extra-long legs come into play. Not only are rabbits fast (some jackrabbits have been clocked at 45mph), but they also run in a zig-zag pattern to better evade predators.

Even the rabbit’s legendary prolific breeding contributes to its survival. Consider that 90% of baby rabbits will be preyed upon before they are 12 weeks old. At that rate, large and frequent litters are necessary. Male rabbits are ready to breed at 7 months old and females at 4. After an only 30-day gestation period, a mother rabbit can produce a little of 4-12 kits.

Because of these astronomical birthrates, rabbits who are introduced to an area without native predators can practically become a plague. Australia in particular has seen huge ecological damage caused by rabbits introduced by European settlers in the 18th century.

To fuel all this activity, both their breeding and their energetic agility, rabbits possess voracious appetites. Basically, they are always hungry. They will continue to eat even if their bellies are full, packing calories away just on the chance that food might be scarce later. That is why when a rabbit looks at all the beauty of your garden, it sees it as a bountiful buffet.

What Good are Rabbits?

In areas where native predators can keep their numbers under control, rabbits do a lot to promote a healthy natural environment. The same appetite that makes rabbits so frustrating to gardeners and farmers makes them living weed-eaters. Their constant feeding keeps down the growth of aggressive plant species, allowing for greater biodiversity. In addition, their waste helps spread seeds and improve soil quality. As previously stated, they serve as a vital food source to various predators. Their role in the ecosystem is so important that they are called a “keystone” species. This means that when rabbit populations suffer a decline in their natural environment (due to disease, for instance), the well-being of other plants and animals in that area suffer.

When you see your precious plants eaten down to nothing, you may not be sure which wild herbivore attacked them. The tell-tale sign of rabbit damage is finding stalks, stems, and small branches neatly cut at a 45-degree angle by the rabbit’s prominent incisors. It can almost look as if some rival gardener came along to snip the life out of your plants with a pair of pruning shears.

In addition to cutting the heads off your flowers and devouring your vegetables, rabbits will make a meal of woody plants. Their nibbling will strip bark bare up to about 3 ft. from the ground, potentially killing the plant. In springtime, they will eat away the tender shoots of new growth. Rabbits may also leave you a pile of their pea-sized droppings, just to let you know they were there.

To contrast rabbit damage with damage caused by deer, when deer eat, they twist and tear a plant because they lack the rabbit’s sharp incisors. The bark deer eat away will be higher up along a tree trunk, and their droppings are more of an oval shape.

How to Control Rabbits

It’s been over 100 years since Beatrix Potter wrote of Mr. McGregor’s struggle to keep Peter Rabbit out of his garden. But, while his frustration is timeless – familiar to so many gardeners and farmers today — rabbit-control methods have advanced beyond simply chasing away Flopsy, Mopsy, and Cottontail with a rake.

Rabbits will only live where they find cover from predators. If you clean up brush piles, keep tall grasses mowed, and block access under porches, sheds, or other structures, you can make your property less safe for rabbits and therefore less attractive.

You can also introduce plants in your garden that rabbits are not as likely to eat. Click here for a list of rabbit-resistant plants.

When using fencing to keep rabbits away, remember that rabbits are excellent diggers as well as jumpers. So, you will need protection high and low. A fence should be buried at least 6 inches underground and stand 2-3 ft. tall, but keep in mind that heavy snowfall will give rabbits a “leg up.” So, give your fencing extra height to accommodate for the boost rabbits will receive if you live in an area with snowy winters.

Some gardeners cover individual plants with wire mesh domes or netting. For a protective dome to do the job, it will also need to be buried at least 6 inches below the surface and be secured in place by stakes in the ground. You can also cover the trunks of trees up to 3 ft. in hardware cloth or plastic tree wrap.

Of course, all these barrier methods will need to be checked regularly for damage, and they may not fit your personal aesthetic preferences.

Many conscientious homeowners think it best to set live traps that will enable them to relocate the animals elsewhere. While they may be motivated by compassion, the results of forced relocation are far from humane. Being dropped into a new location without being able to scout it out first leaves rabbits very vulnerable to local predators. However, it can be just as bad if the rabbits don’t have any natural predators in the area to keep their breeding under control. The invasive rabbits may quickly overwhelm their new home.

The truly compassionate approach is to repel rabbits from your yard so that they leave under their own power. It is better for the rabbits and for their environment. This is why many states have laws forbidding the relocation of rabbits and other wildlife.

As a prey species, rabbits must stay constantly alert to potential danger. To scare rabbits away, some gardeners and farmers turn to fake snakes and owls, bags of human hair, old pie plans on stakes or dangling from a tree limb, automated sprinklers, and scattered soap shavings. Ultrasonic devices also claim to scare away pests with vibrations, but these have been widely debunked.

The problem with all of these approaches — in addition to you possibly not wanting fake snakes and bags of hair in your garden — is that they just don’t work in the long term. Yes, a rabbit may initially be fooled, but its nature compels it to forage constantly, and it will eventually realize that your plastic owl poses no threat. To give your garden lasting protection, you need to continually overwhelm the rabbit’s senses with the message that there is nothing in your garden worth eating.

Faithful defenders of the homestead, a dog in your yard can keep all sorts of invasive critters at bay. However, if you are experiencing a problem with rabbits in your garden, chances are you don’t already have a dog in your home, and you may not feel like adding one to your family just to chase off Peter Cottontail.

I Must Garden Rabbit Repellent

You can quickly and easily protect all your plants from rabbit damage. Spraying your plants with I Must Garden Rabbit Repellent will make your garden less appealing to rabbits, and they’ll go elsewhere to look for food and shelter.

We want you to be satisfied with every purchase from I Must Garden. If you have any questions or concerns, please contact us.